As for today’s Bank of Canada (BoC) meeting, you only have to see one graph to be able to figure out what they’re likely to do: 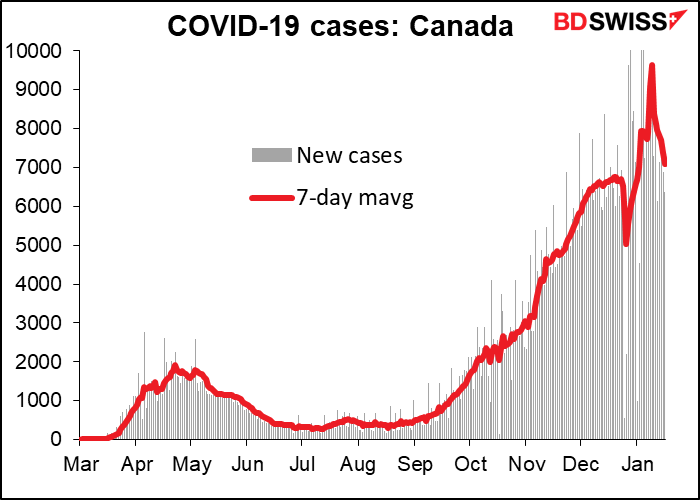 The virus just peaked there on 9 January (looking at the one-week average) and although it’s come down, it’s still a big problem. They’re not going to withdraw support from the economy any time soon. On the other hand, do they need to increase it?

The starting place is their forward guidance from the last meeting on Dec. 9:

Canada’s economic recovery will continue to require extraordinary monetary policy support. The Governing Council will hold the policy interest rate at the effective lower bound until economic slack is absorbed so that the 2 percent inflation target is sustainably achieved. In our October projection, this does not happen until into 2023. To reinforce this commitment and keep interest rates low across the yield curve, the Bank will continue its QE program until the recovery is well underway and will adjust it as required to help bring inflation back to target on a sustainable basis. We remain committed to providing the monetary policy stimulus needed to support the recovery and achieve the inflation objective. (emphasis added)

If they decide to do something, what could they do? 5. Both Gov. Macklem and Deputy Gov. Beaudry have said that “should things take a more persistent turn for the worse, we have a range of options…” These include a “micro-cut” in rates (e.g. down 10 bps, bringing the effective rate down to 0.05%) and reassessment of the effective lower bound – maybe they could go negative, after all – as well as increasing their Large-Scale Asset Purchase (LSAP) program or extending the maturities of the bonds that they buy. If the new forecasts in the accompanying Monetary Policy Report are much worse, they could conceivably make such changes.

However, we haven’t seen any such deterioration that would warrant a downgrade, in my view. Overall output is holding steady (GDP in October was down some 4.1% from pre-pandemic levels). 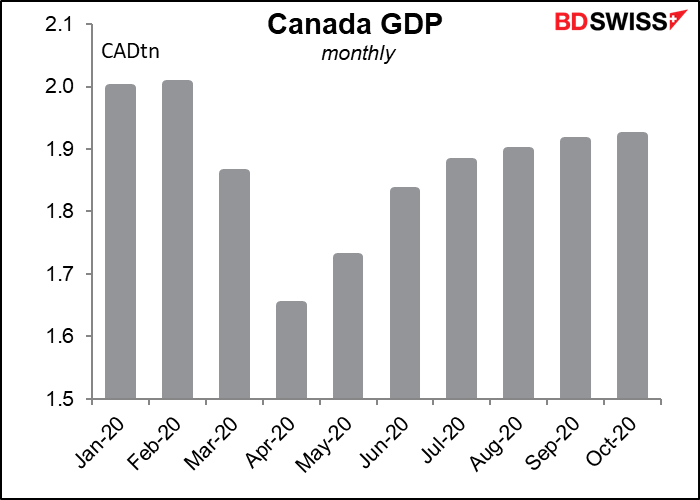 …and while the unemployment rate ticked up slightly in December, it’s still far below peak levels. 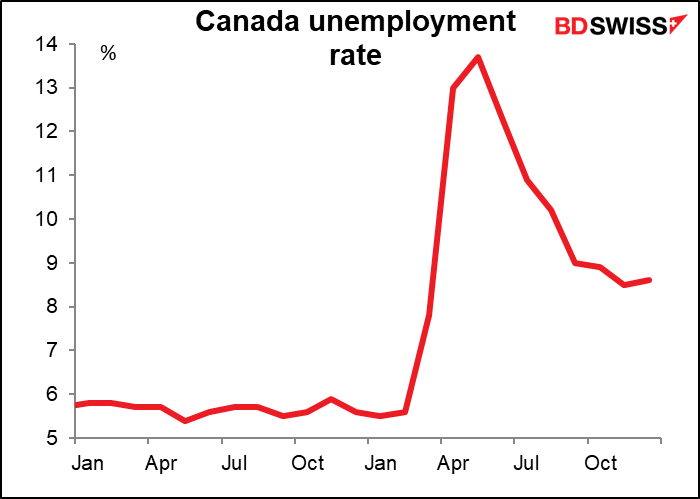 Moreover, fiscal policy is doing a lot of the heavy lifting. The expanded Employment Insurance benefits and the new Canada Recovery Benefit (CRB), which provides income support to affected people who aren’t entitled to Employment Insurance, are supporting the economy as well. These can provide a “bridge” over the rough part until more people are vaccinated and the recovery can begin in earnest, making further tinkering with monetary policy less necessary.

I think they could “twist” their forecasts, downgrading the 1H forecasts because of the worse-than-expected pandemic and lockdown now but upgrading their 2H forecasts in anticipation of a faster-than-expected roll-out of the vaccine and a global recovery. (In October they assumed that a vaccine wouldn’t be widely distributed until mid-2022, but already nearly half a million doses have been administered to the country’s 37.6mn people.) I therefore expect them to leave their policies intact and their forward guidance unchanged, with little impact on the currency.

As the graph shows, USD/CAD used to be more active than usual on BoC days, but last year it was only particularly volatile when they moved rates. I would expect it to be similarly normal today. 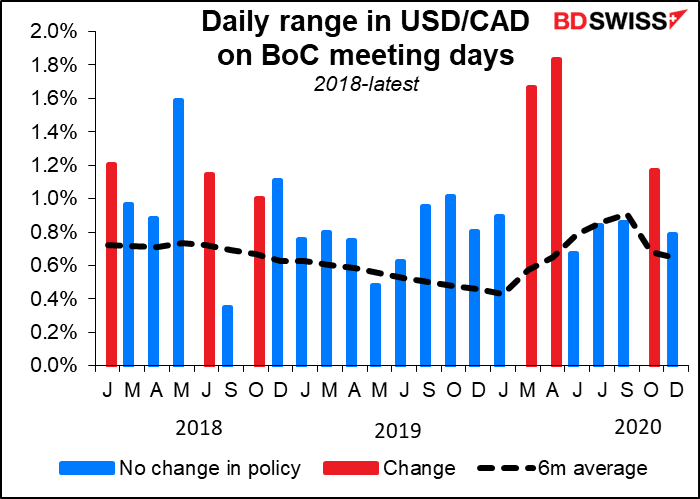 FOMC Meeting: No Change in Policy, but Watch the Dots!

Positioning in FX and Precious Metals: CAD in focus after BoC Meeting

Is Silver “Going to the Moon”?