Positioning in FX and Precious Metals: Speculators bet that Trump would lose. Oops!

Speculators seem to have taken a cautious stance ahead of the US election. They prepared for a “risk-off” episode that would send the dollar higher by trimming their overall USD short position and increasing their long JPY positions to the highest since Sep. 22nd. Same thing with the growth-sensitive commodity currencies:  they flipped to a small short AUD position for the first time in eight weeks and increased their short CAD position. (Although they increased their small long NZD position a bit.)

Most of the reduction in their short USD position was achieved by continuing to cut their long EUR positions, which has been the trend since August 25th.

Specs also reduced their long MXN position, another move consistent with positioning for a Trump win. Oops! They should’ve kept it, as MXN rallied after he lost. 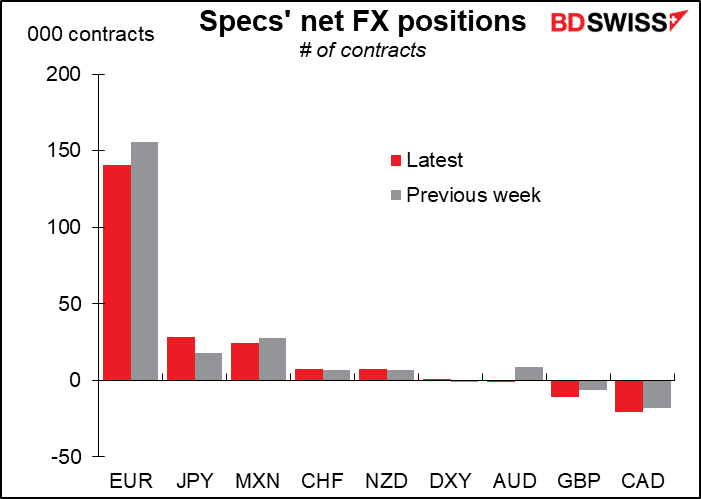 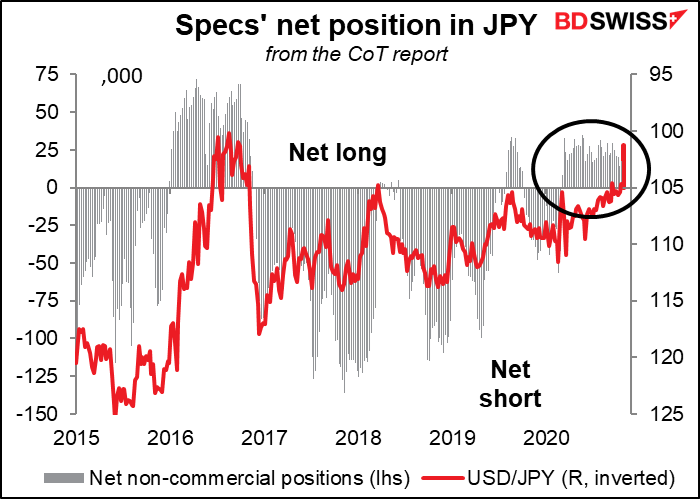 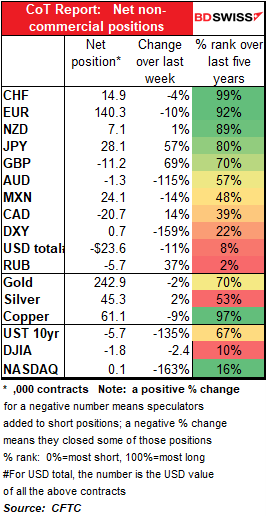 Asset managers made relatively few changes. The only noticeable one was an increase in short GBP positions. 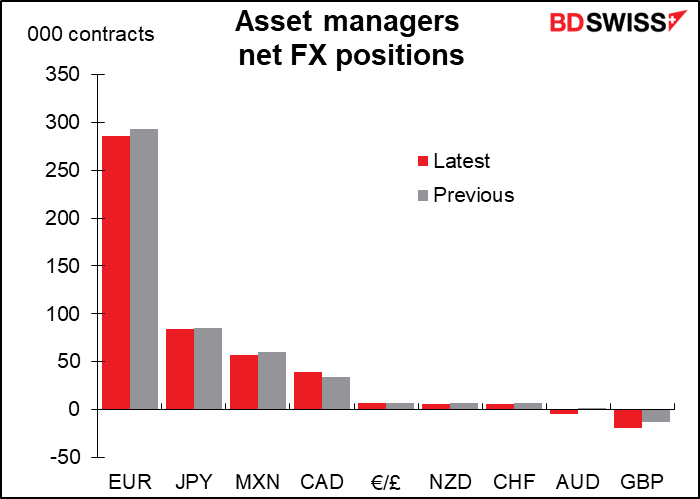 Hedge funds however flipped from short JPY to long JPY, also short EUR to long EUR. Those are somewhat contradictory; long JPY is a “risk-off” position whereas long EUR is a “risk-on” position anticipating a weaker USD. They also trimmed their long AUD positions, which would be a small “risk-off” move. Of course, it could be different funds operating in different currencies and therefore not necessarily expressing a consistent view.

Retail investors followed the trend of cutting long EUR positions. They also cut their long AUD positions a bit too. However they got it right with MXN and increased MXN longs. They increased their short GBP.

Risk reversals: down across the board (almost)

With the election over, risk reversals have collapsed across the board. AUD/JPY, the risk barometer, went from -3.57 to -2.40.

The only one to show a significant increase was EUR/USD. But at 0.39 it remains tiny and well within the range since it turned positive in July. It seems the market still isn’t looking for a major move in EUR either way. 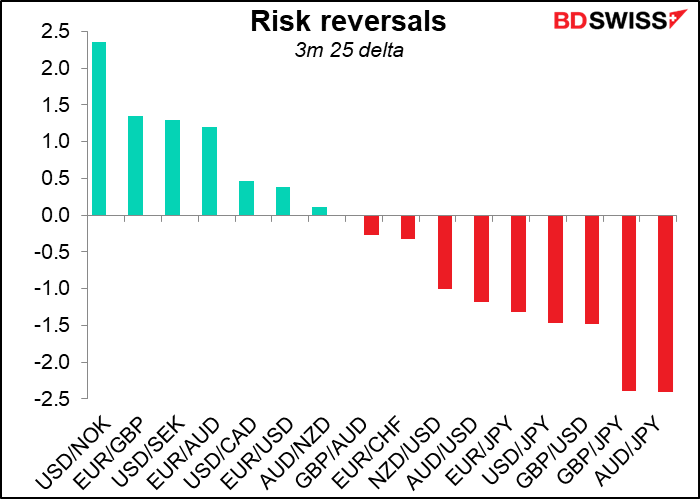 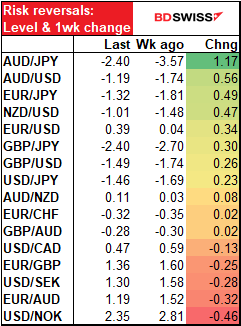 Implied Volatility: down across the board

With the election out of the way, implied volatility fell sharply. Again AUD/JPY was the big mover here, with implied vol falling almost in half. 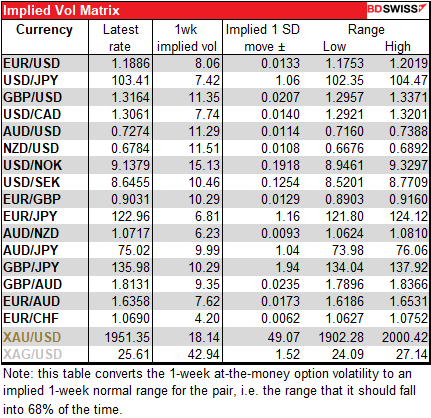 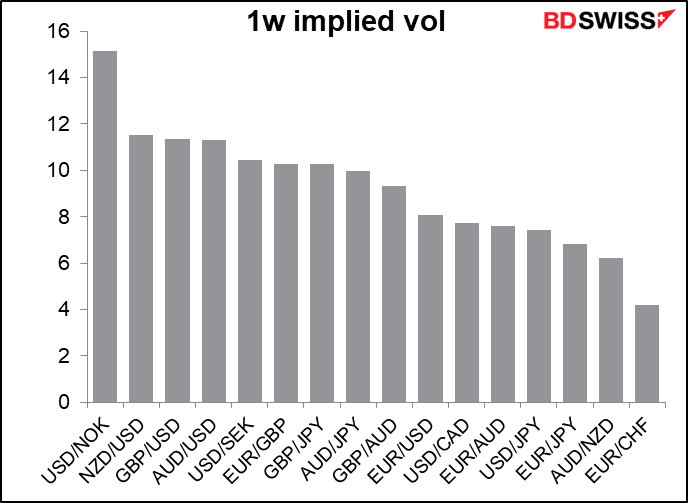 Specs’ positioning:  Speculators reduced their long gold positions a bit while increasing their long silver, but neither move was significant (-2.3% and +1.6%, respectively). 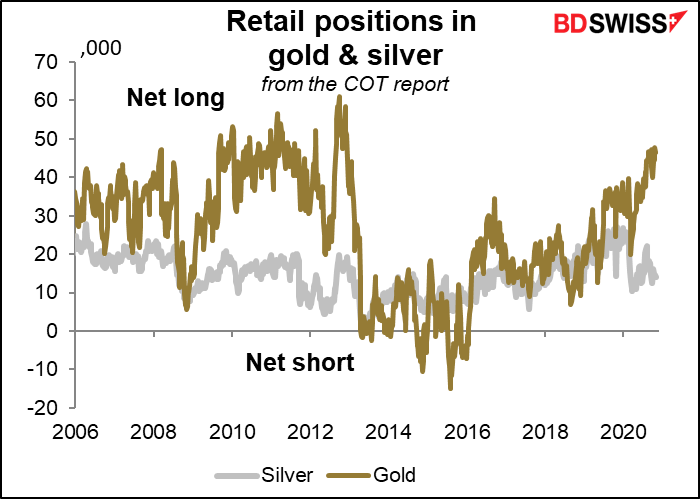 While FX risk reversals fell sharply, the precious metal RRs both ticked up a bit – not significant in themselves, but significant when compared with what was happening elsewhere. 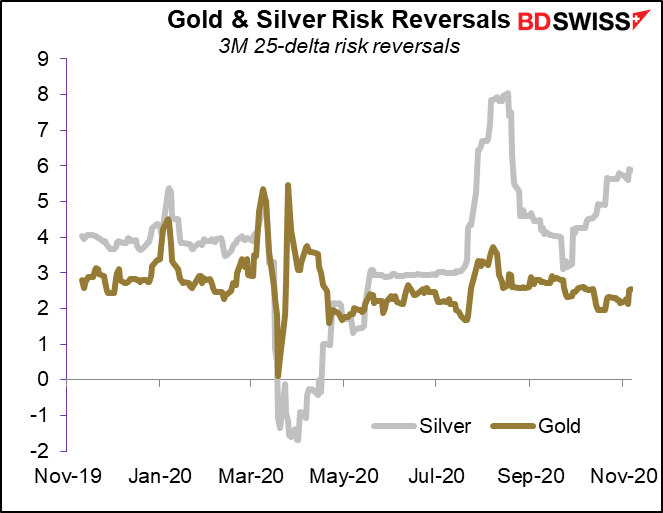 The put/call ratio for the S&P 500 rose, signifying some concern about the 7.3% rally over the week. But the NASDAQ 100 put/call ratio was little changed despite the 9.4% rise.

The DAX put/call ratio fell while the index rose 8.0%. 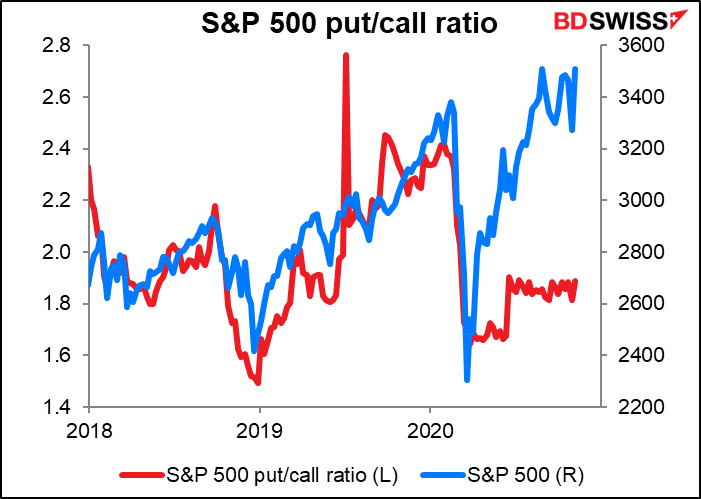 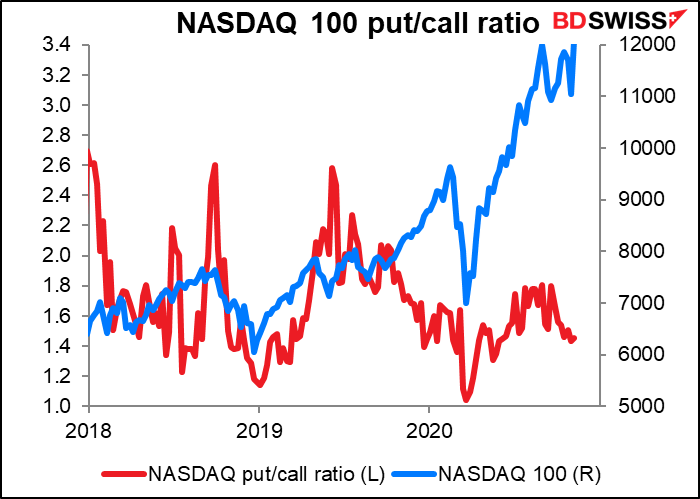 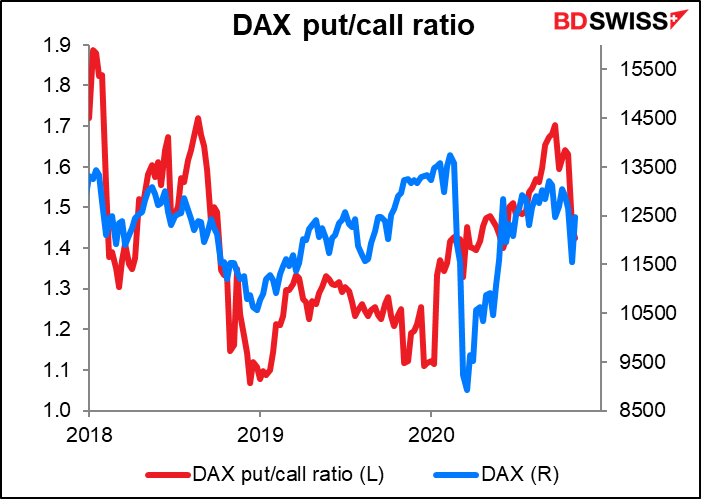 The American Association of Independent Investors (AAII) bull/bear index poked its nose into positive territory, rising to its highest level since Feb. 21st, before the pandemic really hit. 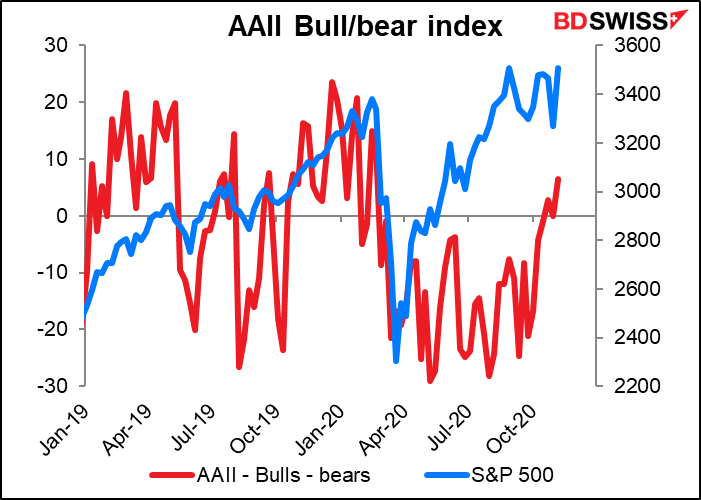