“Risk-on” Sparked by yet again hopes for US Fiscal Stimulus; Nothing much on the Schedule until PMIs Monday 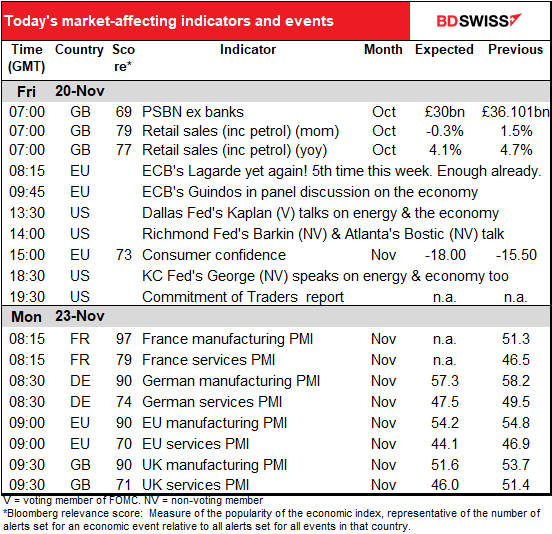 Currencies were little changed in a day of relative calm. The S&P 500 was up 0.4%, a fairly modest move nowadays, while currencies were confined to an unusually narrow range.

There was some modestly encouraging news when Senate minority leader Schumer said that Senate Majority Leader McConnell Y.S. had agreed to staff-level talks on another aid package. This raised hopes of further fiscal stimulus even though Republican aides quickly disputed the idea. They said Schumer was conflating the COVID relief bill with the omnibus spending bill that they’re negotiating in order to prevent the government from having to shut down on 11 December.

I seriously doubt whether the Republicans have any intention of agreeing to any further stimulus. To get an idea of what they intend, note that Treasury Secretary Mnuchin Thursday asked the Fed to return unused funds from five emergency programs ahead of their expiration in late December. This would force the Fed to shut down its Main Street Lending, Muni Lending, and Corporate Credit programs. At the same time, Mnuchin did ask the Fed to extend for 90 days four emergency credit facilities that backstop short-term funding markets, including commercial paper and money market mutual funds. In other words, he wants to end the programs helping small businesses and state & local governments while extending the programs designed to protect Wall Street. Unusually, the Fed openly disagreed, saying the programs serve as “a backstop for our still-strained and vulnerable economy.”

Why is Mnuchin doing this? Probably it’s part of the Trump regime’s “scorched earth” policy. They are trying to screw up the US economy as badly as possible before leaving so that the incoming Biden administration has a difficult time getting the economy back on an even keel. Then the Republicans can take over the House of Representatives in the 2022 election, and Bob’s your uncle! as they say in Britain. So passing another fiscal stimulus bill would be entirely out of character for these guys.

The end of the Corporate Credit program could cause corporate bond spreads to widen, which might have a knock-on effect on the stock market, risk appetite, and thereby to the FX market. As the graph shows, the announcement on 23 March of the Fed’s programs to buy bonds marked the wides for corporate bond spreads. 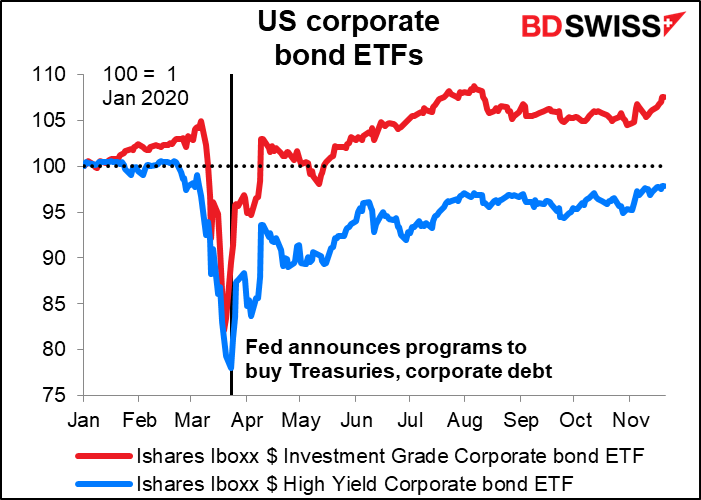 Separately, the EU conference call yesterday failed to resolve the impasse over the budget, with Poland and Hungary threatening to veto the whole shebang over the “rule-of-law” clause. This is not affecting the euro right now but could become a major issue if they can’t reach agreement before the new fiscal year begins in January.

As the graph shows, the narrowing of peripheral bond spreads, the market’s expression of increased confidence in the Eurozone following the decision, was matched by a rally in the euro itself. Any indications that the agreement might unravel could cause the tightening in peripheral spreads and the rally in the euro to unravel, too. 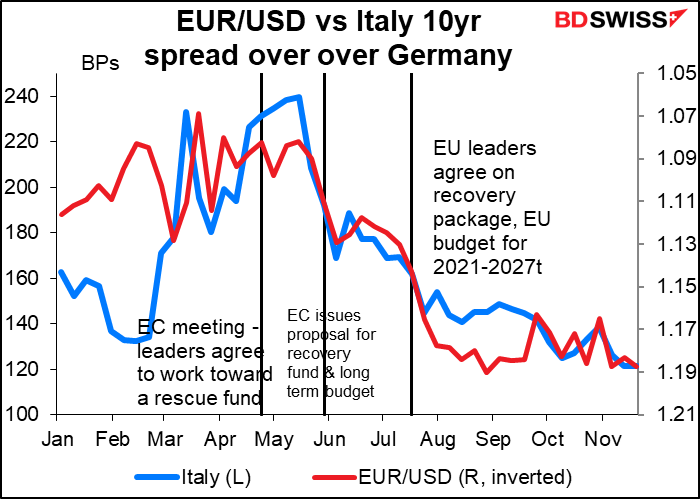 Little on the cards for today. That’s a good thing, because instead of reading this, you can read my far-too-long Weekly Outlook, which should be wending its weary way to you shortly. This week I review some of the market narratives that I’ve ignored recently while focusing on the US elections.

I’ve already gone over the UK retail sales, which besides are out already. They were significantly better than expected, which has tended to support the pound this morning.

Today we get the fifth speech this week by ECB President Lagarde. Pretty soon she’s going to be available on Cameo. For €149.90 she’ll record a video greeting for a friend’s birthday, promising that the ECB “continues to stand ready to adjust all of its instruments, as appropriate, to ensure that you have a happy birthday in a sustained manner, in line with its commitment to you having a happy birthday.” Or perhaps she’ll offer to buy your friend celebratory drinks “for as long as necessary to maintain favourable liquidity conditions and an ample degree of accommodation.”

EU consumer sentiment is expected to decline back to the middle of the recent range – not as low as it was in March, but halfway between the level now and then. No kidding! With up to 150k new cases of the virus a day across the Eurozone (vs about 28k at the peak in March) and many if not most governments reimposing some form of restrictions on activity, the only surprise to me is that consumer confidence isn’t lower. I think this is part of the “virus fatigue” we’re seeing – people are resigned to the virus and it’s not panicking them as much as it was before. I think we’ve seen this phenomenon globally. 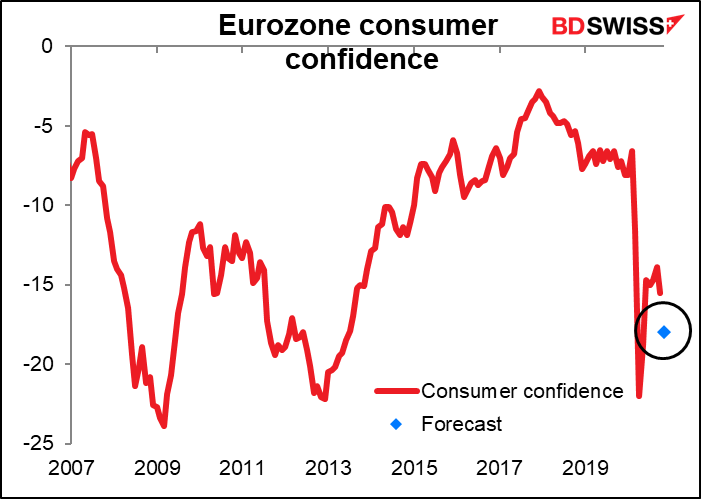 Then nothing on the schedule until Monday morning’s preliminary purchasing managers’ indices for the major industrial economies. They’re expected to be bad; all of them that we have forecasts for are expected to be lower, particularly the UK. That was the experience of Japan, whose figures came out Friday as they are on holiday Monday.

UK services are forecast to fall back below the 50 “boom or bust” line, which is particularly disappointing. The US services PMI is also expected to fall, but nowhere near as much as the Eurozone’s. Furthermore it’s expected to remain so far above 50 that it could prove a positive for the dollar. 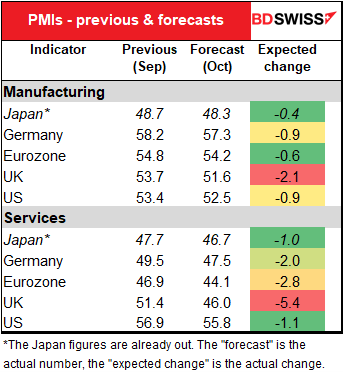 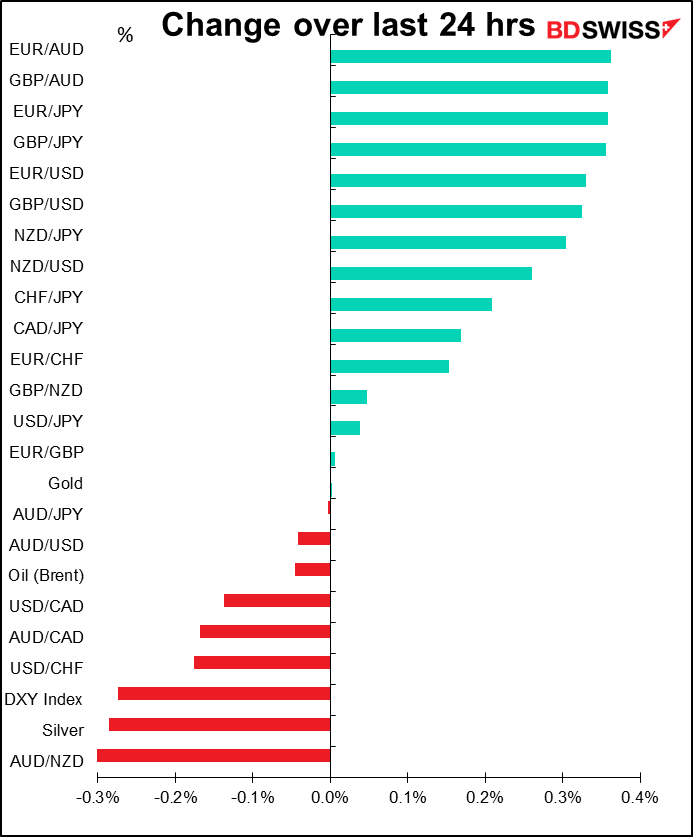