Commodity Currencies Up on hopes for Shanghai revival; US retail Sales, Powell interview 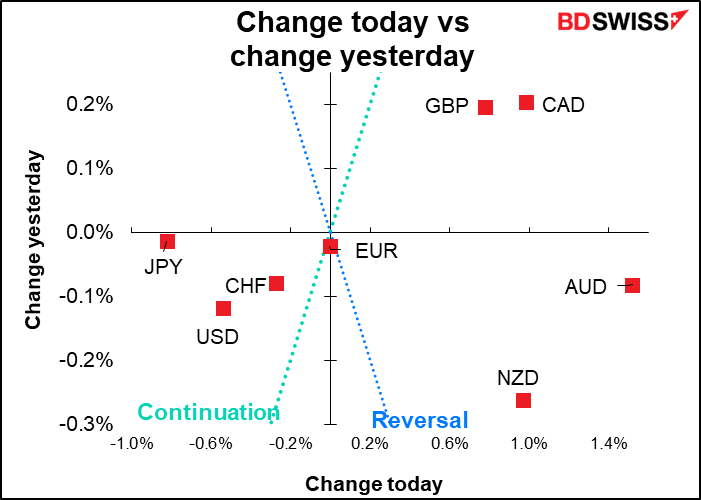 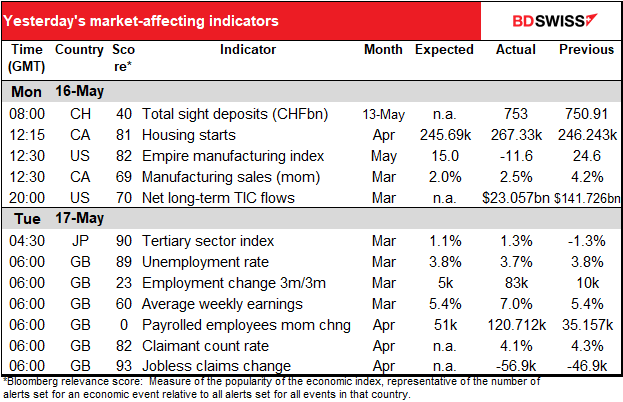 I was interviewed this morning by Dubai One TV on the subject of wheat. The price has soared since India announced that it would halt exports. The country is the world’s second-largest wheat grower (China is #1) but it hasn’t been a major exporter – it normally grows what it consumes. This year though they thought they had an opportunity to go into the world market. Ukraine and Russia together export some 33mn tonnes of wheat. India was aiming to ship 10mn tonnes, which would have gone a long way to making up the global shortage caused by the Ukraine war. However a heatwave has decimated the Indian wheat crop, sending prices there to a record high, and the country decided to ban exports except in certain cases for lower-income countries that require wheat for food security needs.

What we are seeing in the wheat market is global warming intersecting with geopolitics. According to the US Department of Agricultural’s World Agricultural Supply and Demand Estimates (WASDE):

The global wheat outlook for 2022/23 is for lower supplies and consumption, increased trade, and lower ending stocks. Global production is forecast at 774.8 million tons, 4.5 million lower than in 2021/22. Reduced production in Ukraine, Australia, and Morocco is only partly offset by increases in Canada, Russia, and the United States

US wheat supplies for example are expected to be down 3% from the previous year.

However, the WASDE report is already out of date. It forecast that 2022/23 global trade would be “a record 204.9 million tons, up 5.0 million from last year.” However this was based on the idea that “India is expected to remain a significant wheat exporter.” Unfortunately if we take India’s expected 10mn tonnes of exports out of the market, as looks likely, then the global trade would be down 5mn tonnes from last year, not up.

The situation is difficult. As the USDA said, “Most wheat is imported by developing countries with limited production potential. Wheat is a staple food in many low- and middle-income countries.” The UN’s Food and Agriculture Organization (FAO) estimated that last year, some 193mn people were “acutely food insecure,” up nearly 40mn people from 2020. Now they estimate that “the global number of undernourished people could increase by 8 to 13 million people in 2022/23, with the most pronounced increases taking place in Asia-Pacific, followed by sub-Saharan Africa, and the Near East and North Africa.”

While prices of all grains have been rising, wheat has outperformed, and the latest move by India has given it another leg up. 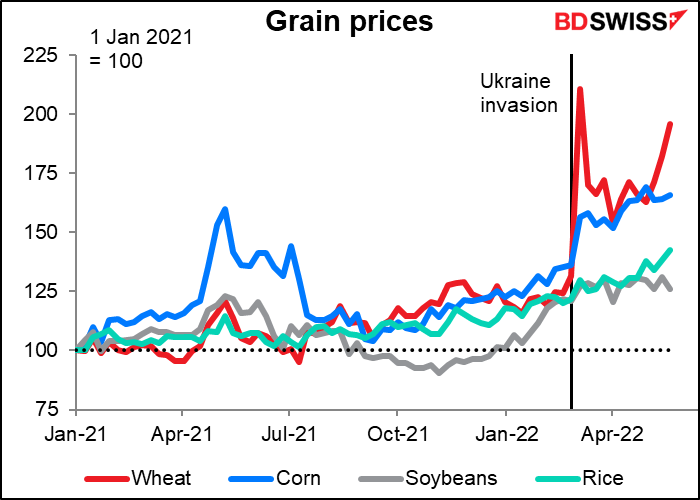 The big danger I see is not only to the global wheat market but also to all agricultural commodities. As prices rise, the temptation of governments to cut back on exports and supply their domestic markets first becomes irresistible. As Bob Marley sang, “A hungry mob is a angry mob.” Indonesia has halted palm oil exports while Serbia and Kazakhstan imposed quotas on grain shipments. Such restrictions will “exacerbate price volatility, limit the buffer capacity of the global market, and have negative impacts over the medium term,” the FAO warned.

The main point of interest in the FX market is the remarkable recovery of AUD. It was falling yesterday morning after China announced much worse-than-expected data, with retail sales falling an especially steep 11.1% yoy and industrial production down 2.9% yoy (instead of up 0.5% as expected). The China report initially hit commodities and the commodity currencies.

Nonetheless the market quickly shrugged off the report and both commodities and the commodity currencies moved steadily higher throughout the day. AUD mirrored the recovery in copper prices…

…as well as the recovery in general risk sentiment.

The recovery was all the more remarkable against the background of the large negative surprise in the Empire State manufacturing index, which as shown in the table above plunged into negative territory. New orders and shipments fell at the fastest pace since early in the pandemic. The market movement is surprising, given that the major concern of markets nowadays is the risk of slowing global growth. Most of the data yesterday pointed to a slowdown (except the Canadian data) and yet prices of most commodities rose, with oil up 4.4% on the day. 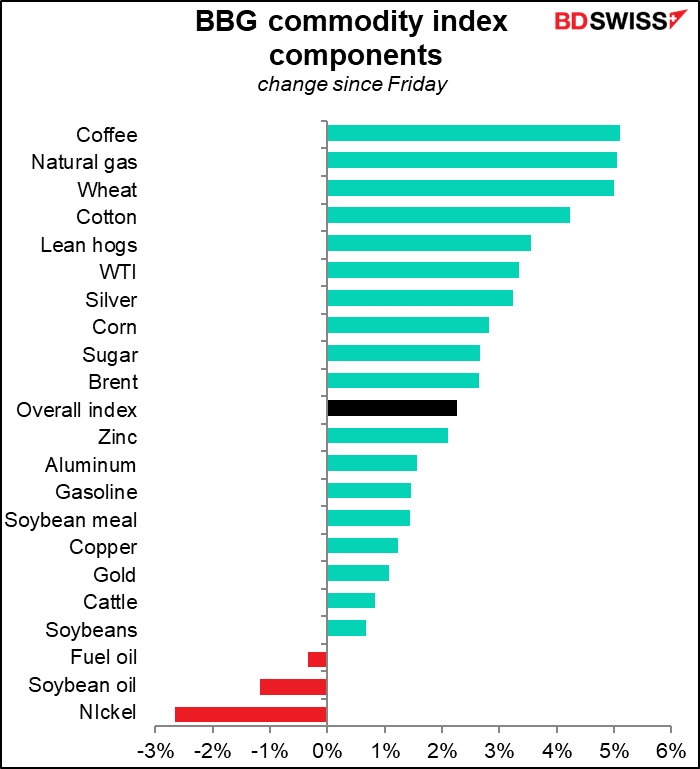 Meanwhile, the safe-haven JPY was the worst-performing currency, which one might expect under the circumstance.

The answer probably lies in Shanghai. According to Reuters, Shanghai Monday announced plans to end the six-week COVID-19 lockdown from June 1. Deputy Mayor Zong Ming said Shanghai would reopen in stages, with movement curbs largely to remain in place until May 21 Between May 22 and May 31, should daily infection numbers continue to fall, epidemic management will shift to a “normalization” phase. From June 1 to the end of the month, the city will seek to fully reopen. 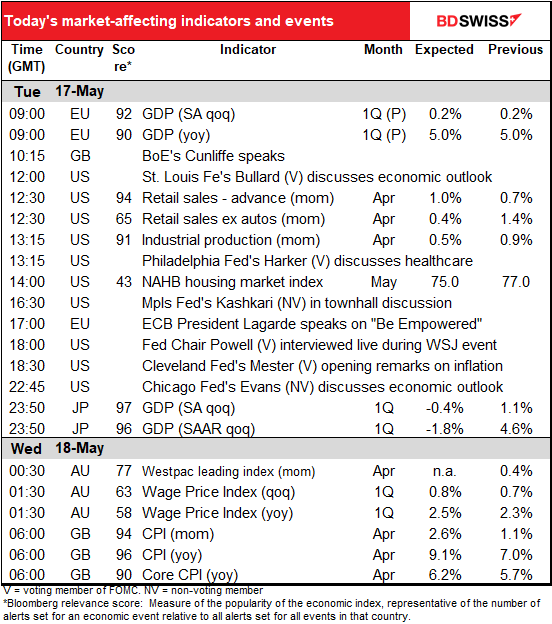 The European day starts off with the 2nd estimate of Eurozone Q1 GDP. This is rarely revised and when it is, normally it’s just ±10 bps so no big deal.

The Q1 consumer spending data pointed to a flattening of demand for goods as people started buying more services again. That’s to be expected as the pandemic winds down (or, more accurately, as peoples’ perception of the pandemic winds down) and everyone starts going out again (personally I’ve started going to the gym again after two years of doing push-ups at home). The combination of high inflation, the end of the pandemic-related government income support, and depressed consumer sentiment could accelerate this trend. The big bright spot in goods spending remains auto sales, which were up about 9% month-on-month during the month.

The headline figure is likely to show consumer demand remaining strong, which would tend to be positive for the dollar. 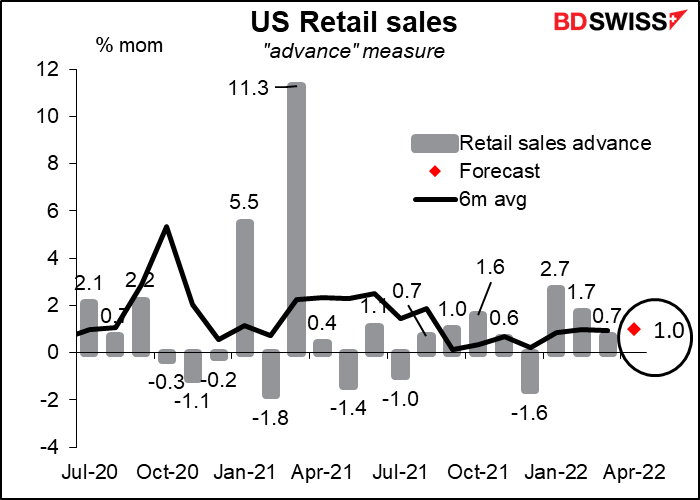 However as I mentioned some of that will be strong auto sales, also some will be higher gasoline prices as gasoline hit a record high. Excluding those two, it’s expected to be a mediocre figure. That could spell trouble. Or more likely people will just assume that the Fed’s on a hiking course no matter what and so long as retail sales don’t collapse, they’re not going to be diverted. In which case it’s likely to be neutral for the dollar. 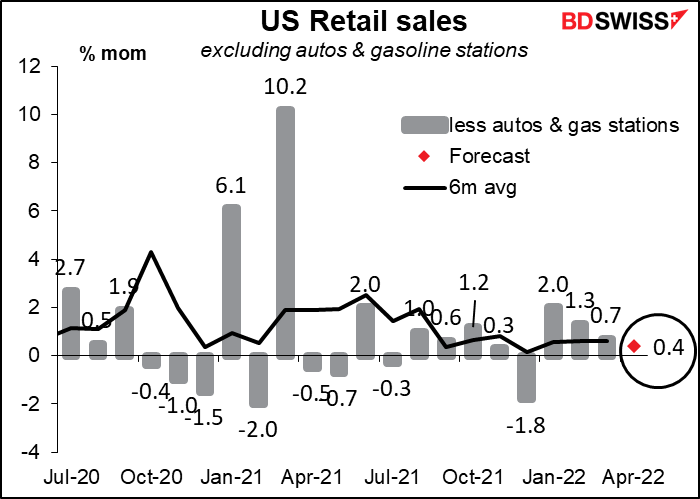 Either way I have to admit that the currency market’s reaction to the retail sales figure over the last year or so is neither particularly strong nor predictable. 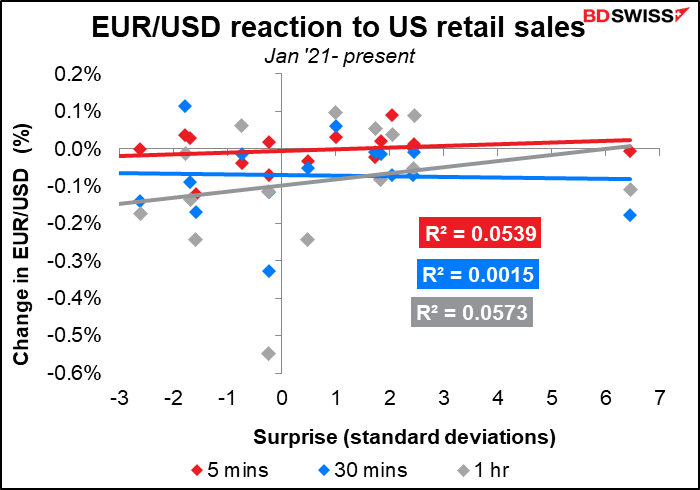 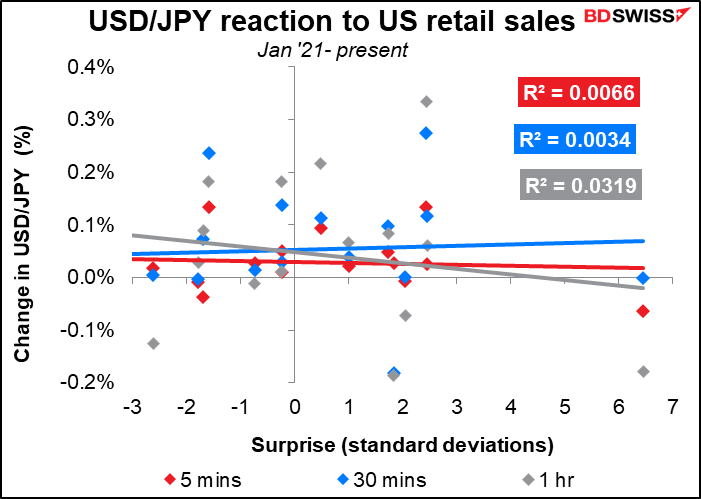 Shortly after that comes out we get the US industrial production. This one is much more important for the stock market than for the FX market. It too is expected to slow a bit, although remain in positive territory. The market consensus increase would leave the index 3.9% above its pre-pandemic level so not too shabby, but still, the market might not appreciate the slowing trend combined with the slowing retail sales. USD-negative? 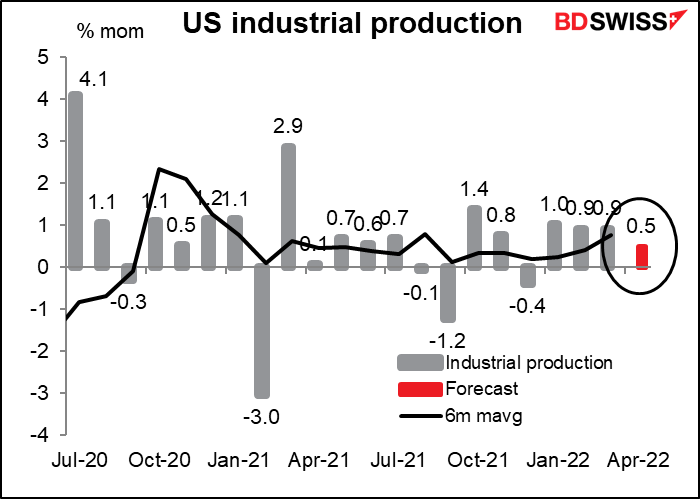 We then get a slew of Fed speakers, including Fed Chair Powell, who will be interviewed as part of a Wall Street Journal event. I’d expect him just to be singing the same old song as always, but that doesn’t preclude the market dancing to the music yet again. He said last Thursday that “Whether we can execute a soft landing or not, it may actually depend on factors that we don’t control.” In other words, we hope we can do this without crashing the US economy but we’re not sure.

“What we can control is demand, we can’t really affect supply with our policies.And supply is a big part of the story here. But more than that, there are huge events, geopolitical events going on around the world, that are going to play a very important role in the economy in the next year or so. So the question whether we can execute a soft landing or not, it may actually depend on factors that we don’t control.”

I think the question of “soft landing or hard” will be uppermost in peoples’ minds. Also I’d expect him to reaffirm that he’ll be shooting for 50 bps hikes at each of the next two meetings and is not considering a 75 bps hike. Any hints that a 75 bps hike might be possible would be big news.

ECB President Lagarde will also be speaking but I don’t think her speech will have much to do with policy. She’s speaking at a benefit for Soroptimist International, a global volunteer movement that advocates for human rights and gender equality. Her speech is on “Be Empowered.”

Overnight we’ve got barrels of fun waiting for us.

Japan announces its Q1 GDP figures. These are always revised massively later on, with the final revision not coming until roughly nine months after the particular fiscal year ends. So the Q2 GDP (April-June 2022) won’t really be finalized until December 2023. Nonetheless the market moves on what it knows regardless of how accurate it is.

The market is expecting a fall in output, mostly due to lower private consumption, which in turn is due to the reimposition of COVID-19-related restrictions. Also there’s likely to be some negative effects from the problems in China, both in reduced exports and supply interruptions. Growth is expected to rebound in Q2 so I don’t expect this to have a lasting impact on the yen. Nonetheless it’s yet another reason for the Bank of Japan to hold off normalizing policy or even just tinkering with the ±25 bps rate cap in their “yield curve control” policy. JPY-negative 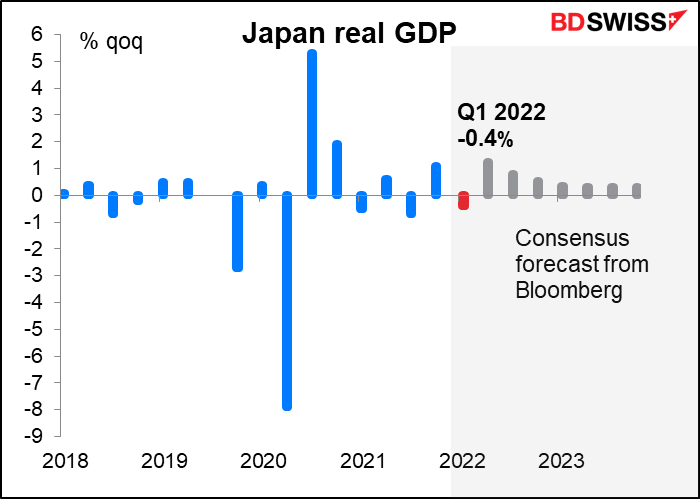 Then comes the big Australian indicator for the week, the 1Q wage price index. I ran through this in some detail in my Weekly Outlook  but since I get paid by the word I’ll repeat here what I said.

Up to the April meeting, the Reserve Bank of Australia (RBA) had argued that it couldn’t raise rates because “growth in labour costs has been below rates that are likely to be consistent with inflation being sustainably at target.” This of course changed at the May meeting, when they said “The Bank’s business liaison suggests that wages growth has been picking up” and they went ahead and hiked by 25 bps. Now we have to see if the data back up what they’re hearing. 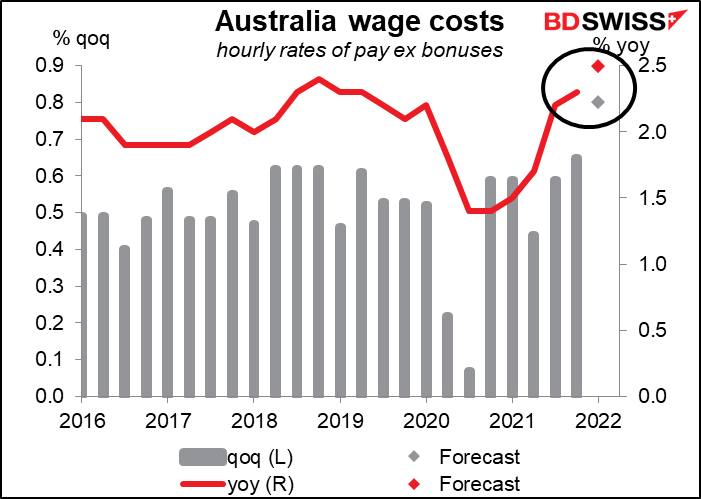 This is a rate of wage increases consistent in the past with inflation of 2%-2.5% yoy so it should reassure the RBA that they’re on the right track and can continue to hike further. AUD+ 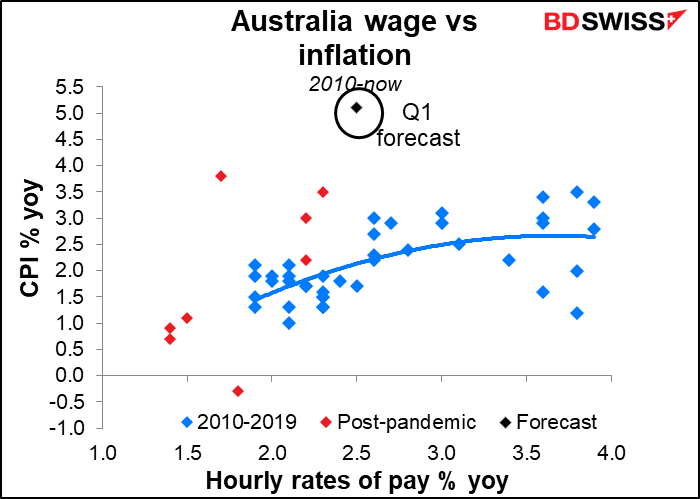 Then Wednesday morning at 7 o’clock as the day begins, Britain announces its consumer price index (CPI). It’s expected to soar as the price cap on household energy jumped 54% in April. The headline figure shouldn’t shock anyone as the Bank of England forecast inflation would be around 9.1%  yoy in Q1. Still, even core inflation excluding energy is forecast to rise, too. Coming after last week’s disappointing GDP figures, which showed that output fell in March, the CPI will illuminate the Bank of England’s dilemma: an acute trade-off between inflation and growth. I suspect they will opt for growth. That implies lower real interest rates and a weaker pound. 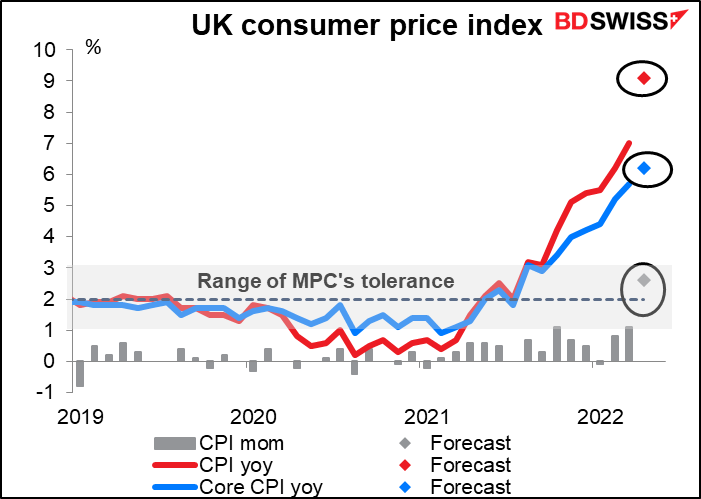 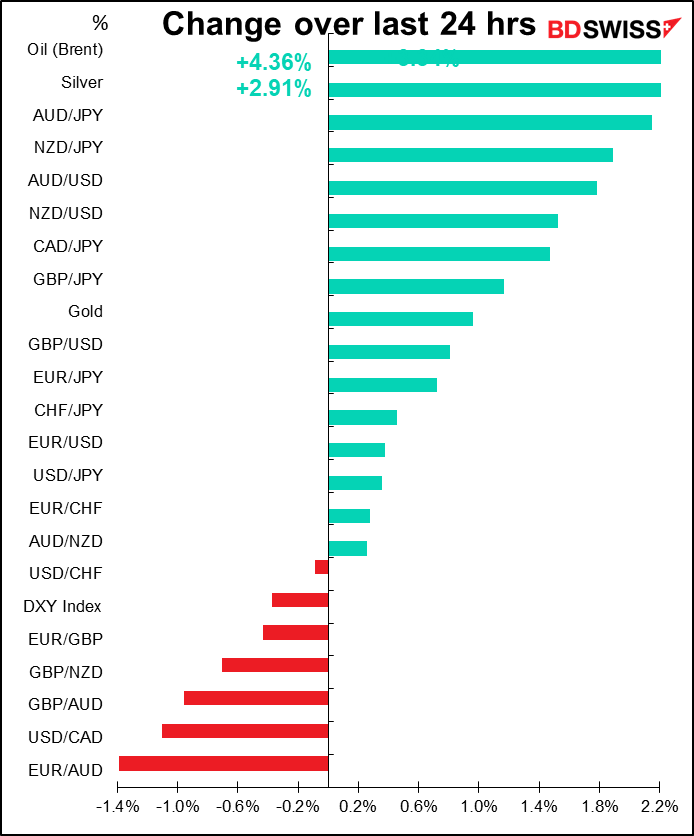 NZD Up, USD Down in inconsistent Trading; U of M survey

BDSwiss Copyright © 2022 BDSwiss All Rights Reserved
Close
We use cookies to ensure that we give you the best experience on our website. If you continue to use this site we will assume that you are happy with it.Ok